Write your Mind….. Feed your Mind!

Write your Mind….. Feed your Mind!

An extremely important part of a Write your Mind workshop is the food! All home made and including sourdough bread, pauses in the day’s writing to share lunch, and breaks for morning coffee and afternoon tea with cake are just as crucial when it comes to well-being as the writing and reflecting that goes on between the group.

By popular request, I will be sharing some of the recipes that have featured in the workshops from my home on this blog. 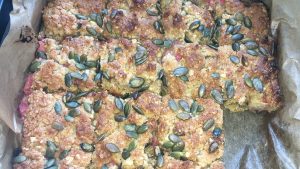 Melt butter, sugar and golden syrup in a pan.

Stir in all the dry ingredients except raisins. Spread half the mixture onto a square tin or small tray lined with baking paper. Spread the fruit on top, and sprinkle the raisins. Top with the rest of the mixture. Scatter mixed seeds on the top.

Bake for 15 minutes at 190°c. Mark into slices while still warm.

Grease a 12″ x 8″ tin and set oven to 180°c. Cream fat and sugar until pale and fluffy. Stir in eggs, potato, fruit, then flour, beating gently. If too loose, add 1 or 2 oz more flour. Smooth in the tin and bake for 45 mins until springy. sprinkle with caster sugar immediately. Cut into slices.

more recipes to follow! let me know if you have any requests…..